Your (licensed) DC car service cares (but not in a creepy way).

I drive for a licensed DC car service. Do you know how many background checks and verification procedures I go through? I’m licensed for commercial driving, but there’s also an interview, criminal background check, drug tests, fingerprint checks, defensive driving courses, and even a sex trafficking awareness course. I keep waiting for the retinal scan to become mandatory. 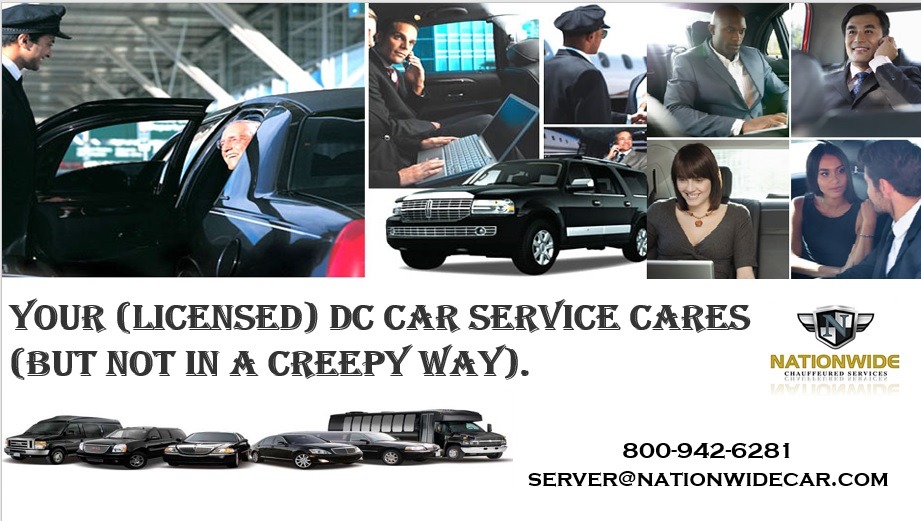 I worry about people who get rides in DC from car services that aren’t licensed. You know—ride-share services that claim to connect you with other everyday people? You get a ride and they make a buck! What a friendly arrangement! Maybe your driver will be listening to your favorite Broadway soundtrack in the car! Maybe you’ll both sing along! Maybe you’ll become best friends!

Trouble is, strangers often turn out to be . . . well, strange. If not downright dangerous.

That’s why licensed DC car services have regulations that they and their drivers have to meet.

I tried to tell my friend Jessica something like this.

Jessica was at a show at the Kennedy Center, and she called a DC ride-share company to get home (and no, I will not tell you their real name; I have class). At first, everything seemed fine. Her driver dropped her off, and asked her to leave him five-star review. He said he’d rate her high as a rider, too.

Hot tip: Your car service driver shouldn’t rate you. He’s the one who needs to look good.

The next day, Jessica got a text from her car service driver. Then another text, and another, and another. She’d thought he only knew her first name, but it turned out he actually had access to her full name, and he found her on Facebook. And then he sent her a photograph of herself walking out of her job.

I helped Jess file a complaint with the ride-share company, and we read the terms and conditions she’d quickly agreed to when booking her ride. Wouldn’t you know it—she’d waived her right to a juried trial or to sue the company if her driver caused her “bodily injury” or “death.”

Ride-share companies get away with this. Kind of.

They claim they’re not charging for rides because riders pay on a sliding scale or with tips.

Also, ride-shares don’t usually provide cars. They just make it possible for people WITH cars to connect with people WITHOUT cars. Your driver could be anyone. He could be drunk when he picks you up. He could have killed a hitchhiker once. He could be a One Direction fan.

And what happens if there’s an accident? What if his personal insurance doesn’t cover your “bodily injury?” What if he doesn’t maintain his vehicle or he can’t drive on icy roads? What if—

I’m getting worked up. I should calm down.

There’s a key difference between a ride-share program and a licensed car service in DC. Only one is actually a transportation company. The other is a technology company.

That’s why there are rules and regulations that a quality, licensed DC airport car service has to meet.

I’ll leave you with the bit of advice I gave to Jess: Friend, do not get in that car with that stranger. What would your mother say?