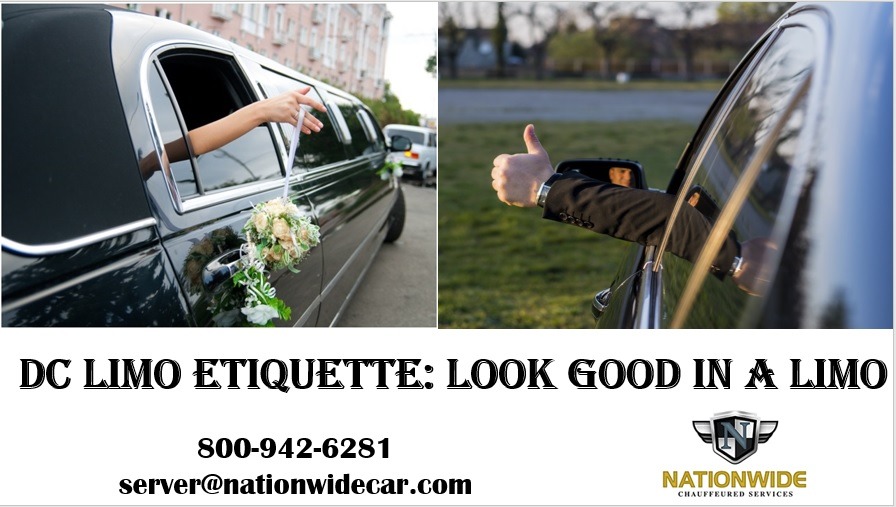 Last week, I talked about how to hire a limo in DC , and ride in style through our nation’s capital.

This week, I’m going to talk a little more about that style. The last thing you want is to hire a sweet ride only to look like a big dork with delusions of grandeur, especially in DC. Limo etiquette is important.

Here is my guide to DC limo etiquette. Get your red carpet on.

First of all, don’t be late for your ride. That’s bad etiquette in general, but your driver might have other engagements. Not to mention, you’ll wind up paying for extra time.
Tell your limo driver if you want him to make any stops or take a specific route through DC before starting the trip. It’s also good limo etiquette to tell him who will sit where in the limo, which can cue him as to who to treat like the boss.

Let the biggest VIP, or the person who paid, have the best seat in the house. This is the “power seat.” It’s usually the back right seat, or the curbside seat. There isn’t really a bad seat in a DC limo . . . but if there were, it would be the “jump seat,” which faces backwards. The rearmost middle seat is not enviable, either.

Don’t ask your limo driver to go over the speed limit. This is something you might be tempted to do if you were running late. We’re not taxi drivers, and we adhere to rules that keep us in business and keep you safe.

Let your driver open the door for you. That’s part of his training. If you do it yourself he’ll get discombobulated and won’t know his place in the world. When your trip is over, you may be tempted to get all independent—you self-made American, you—and open your own door. But limo etiquette says to sit there and wait for your driver to open the door.

It’s not good limo etiquette to clamber in like a monkey. A classy DC lady sits down on the seat, then keeps her legs pressed together while she swings them into the car. Kate Middleton can do it, and so can you. Pretend you’re a mermaid. Do the same thing when you’re getting out of the limo. If you have a lot of papers and files and things to get together, do that before you get out. It’s considered rude to stick your butt out at all of DC and lean into the limo to get your things. Kate Middleton would NEVER.

And by the way, don’t call it a limo. I know, I know—I’m doing it, so why can’t you? You can call it a limo if you want, but it’s more VIP-sounding to say “limousine.” Or, if you want to make the impression that riding in a limo is no big thing and you do this all the time, just say “car.” You are so swanky!

Don’t open the sunroof or window and stick your head out. This is perhaps the most difficult bit of etiquette to follow in a DC limo. But standing up, sticking your head out, and yelling “YOLO!” to all of Washington DC is going to embarrass someone. (Probably you, when you’ve sobered up.)

Speaking of sobering up, don’t reach for the liquor first, unless you’ve paid for the ride. Whoever has paid for the limo is the “host,” and it’s their job to offer you drinks. If you do have a drink, don’t take it with you when you get out of the car. Pretend you were in a restaurant and leave your drinks behind.

Treat the limo nicely. Don’t “rock star the motel room.” Your driver will clean up, but he is not a maid. (If you get rowdy, I WILL turn the car back around.)

In the same vein, don’t harass your driver. This seems obvious, but you’d be surprised how the combination of Washington DC, a limo, alcohol, and a newfound sense of self-importance can make some people treat their driver badly.

Now what about that tip? Yes, you should tip your limo driver. But make sure your tip wasn’t included in the initial charge. Otherwise, slip him 20% in an envelope before you exit the car for the last time.

And those are the basics of DC limo etiquette.

Nationwide Chauffeured Services
server@nationwidecar.com
800-942-6281
We are available 24/7 and have the vehicle to suit your needs!